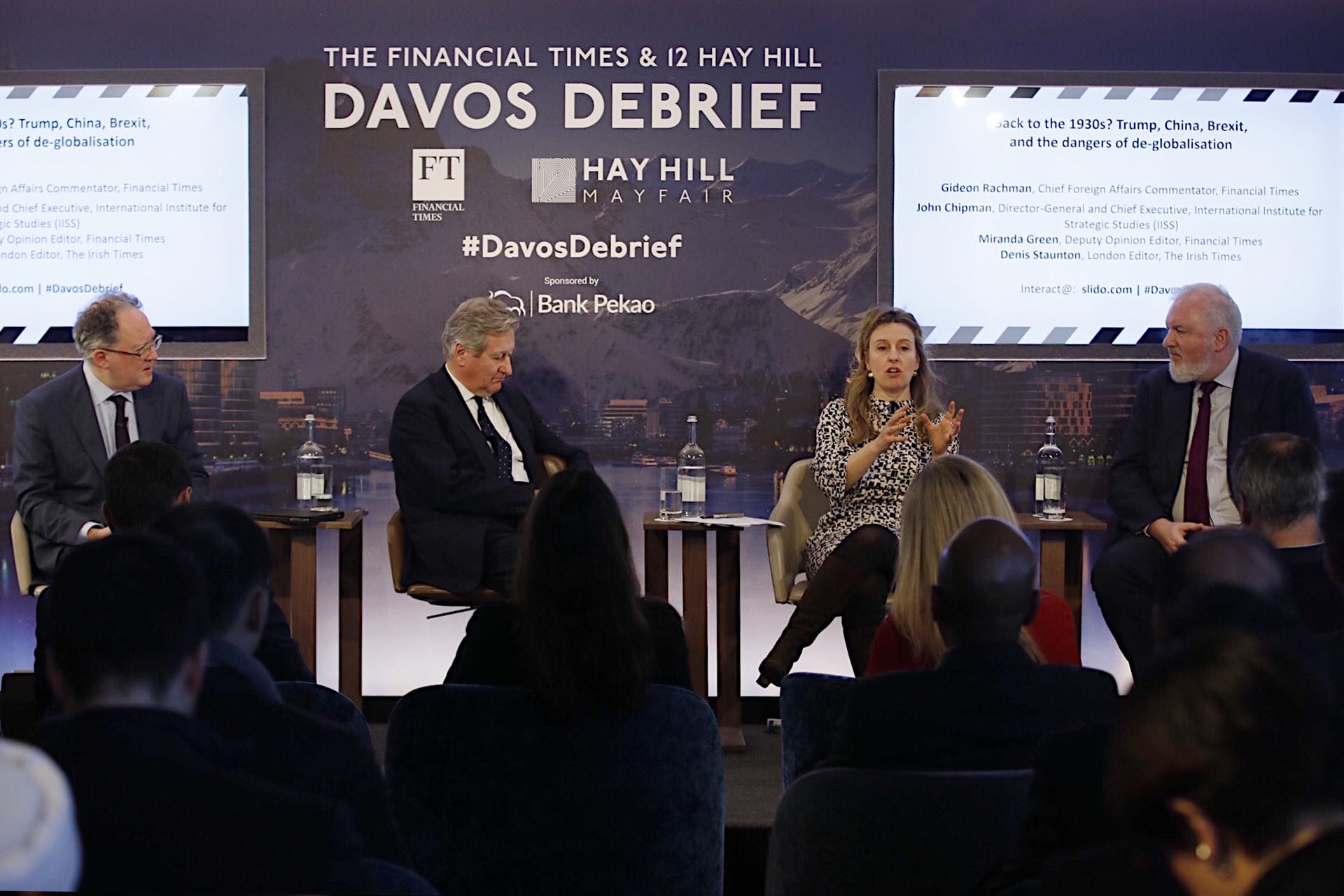 The day’s second session was called “Geopolitics” and was scheduled to be a discussion on how the election of Trump, the vote in the UK to leave the EU, the growth of China’s economic power, and the dangers of de-globalisation signalled a possible return to the bad old days of the 1930s.

As is the way with such things, the discussion centred mainly on China and Brexit and the 1930s didn’t get a look in. This didn’t detract from a lively debate, though.

The Chair for this session was Gideon Rachman, the Chief Foreign Affairs Commentator, at the FT.

Before introducing the panel for the debate, Gideon offered a quick review of what he called this year’s “slightly strange Davos”.  This feeling was prompted primarily by the absence of the political big beast. The Trump establishment was embroiled in lock-downs, Theresa May in Brexit, and Macron wrestling with Les Gilets Jaunes. On the plus side, this made Davos a lot more pleasant to navigate in the absence of security details.

Without Trump as the main act on the first day, the privilege fell to David Attenborough instead. Climate was given centre stage, as well it should, but for the event as a whole, the two big topics hanging over every conversation were Brexit and the growing US-China trade war.

A lack of big political stars doesn’t spell the death of Davos but for the first time in a long time there did feel to be no political or technology heroes to drive the conversation.

The panel for this debate featured:

Asked what he thought was the most important geopolitical influence of the moment, John plumped for the continually changing belt and road initiative from China. He gave the example of a huge investment in an unnecessary port in Sri Lanka that, when the government could no longer manage the repayments, China took over on a 99-year lease.

And Malaysia is a sign of a backlash when it calls China’s offer of a 22 billion dollar loan as new colonialism. At the same time, China’s most crucial strategy is via the new digital Silk Road. The relationship between the Chinese government, Huawei, and network infrastructure in many countries is something getting closer scrutiny.

GCHQ in the UK has examined Huawei’s codebase and told the company to upgrade it — at a cost of 2 billion pounds. The fact that the Chinese accepted the bill shows their eagerness to remain in the UK.

Gideon commented that if the US and China relations continue to deteriorate, companies will need to make a choice about Chinese technology — and other supply chain partners — when the US starts putting pressure on them.

And then, just like that, we were onto Brexit. Miranda thinks that May’s terrible strategy negotiating in both the UK and the EU may actually end up working. But, even should it work we will have arrived wherever we end up via a disastrous route that will have damaged relationships with the very people with whom we want to trade. The Commons too has acted poorly throughout the process. “A Bayeaux Tapestry of inadequacy” was Miranda’s splendid phrase to describe the complete lack of leadership and purpose shown by the great majority of MPs.

And last night Prime Minister May made the choice to compromise with the Tory right flank rather than across the House. Strangely enough, polls tend to show that, as the Commons has moved away from notions of compromise about Brexit, the public is moving towards it.

Dennis was asked if there is a chance of compromise on a backstop. He thinks that the things that happened in the most recent Commons vote means things have changed. A change to the backstop is mooted, along with a rejection of an extension. May’s problem is that she can’t say what the alternative arrangements for Ireland involve.

May now has to go back to Brussels and ask for what she wants — as dictated to her by her Brexiteers. Unfortunately, there is no example anywhere of any border where the proposed magic technology is available or working. But that’s now become the only issue because the Commons said that if you fix the backstop we’ll pass the deal. The Irish may now come under pressure. Ireland has played it tough because they think a no deal Brexit will be temporary.

Miranda has friends who thought that the way things have been going with the negotiations and the Commons that Brexit was likely not to happen. She believes it will indeed happen but the relationships with the rest of Europe are now damaged. Angela Merkel, for instance, is so bored with the whole issue that she can barely be bothered to answer questions about it.

John believes that even an integrated Europe wouldn’t have the strategic ability — expeditionary or defence — without UK forces and that, even after Brexit, there will be a close relationship between Europe and the UK driven by mutual need.

Gideon brought up Trump, if only to ask if he would make it through the next two years.

Dennis thinks that although Russia and Mueller etc are big news in the DC bubble, it doesn’t really play across the country as a whole. In fact, it’s probably in the interests of both the US and Democrats to leave Trump in place and see him either resign or fail to be re-elected. At the same time, the old party of the Democrats has gone and has been replaced by a younger, more left-leaning crew. The Clinton model of socially progressive but fiscally conservative Democrats no longer flies.

A question from the audience inspired debate as to how to prevent a Corbyn government. Dennis said the best way to keep Corbyn out of power would be to pay people more and to pay more taxes, which is, after all, the basis of the Labour manifesto. John said that Corbyn would be a disaster from a strategy point of view because he would have relations with authoritarian regimes, such as Madura and Putin. No doubt Saudi Arabia doesn’t count as an authoritarian regime because they buy British weapons. He also said that Corbyn would remove the nuclear deterrent. (This is not official Labour policy ad Corbyn is obliged to follow the demands of Conference.) Dennis countered that foreign policy would not be a priority and that domestic policy is his focus.

A final question to discuss was whether China could overtake the US in the near future.

Dennis thought that the US economy has proved to be remarkably robust and that China continued rise is beginning to stall.

Miranda hoped that democracy and economic success will continue to go hand in hand, a pleasant sentiment which skirts the true meaning of democracy.

John told us that China is using all elements of its hard and soft power to further ambitions. He pointed out that in 2018 China had more naval ships in the Mediterranean than did France. China continues to build huge numbers of ships and at the same time prevent ships from other nations to enter seas they believe they control. They are, in other words, the masters of double standards.

And with that, Gideon wrapped up session two.

Casa Mia – How Venice came to be my home