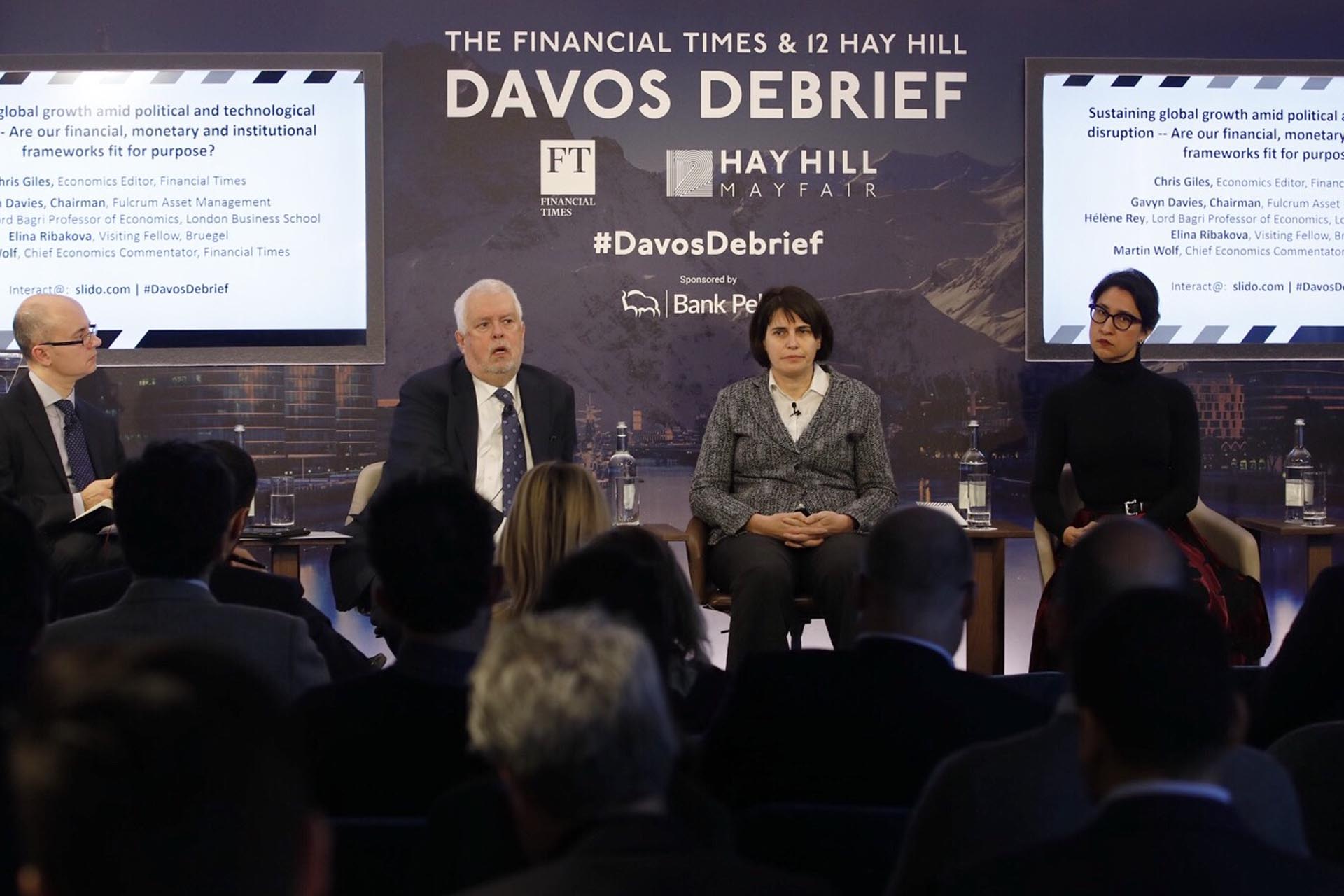 12 Hay Hill is once again hosting London’s favourite post-Davos event. Organised by the FT and sponsored by Bank Pekao, there will be three sessions in which a range of top figures from finance, business, and journalism will discuss how the economy is being — and will be — affected by the forces of disruption rattling across the globe.

After a sumptuous breakfast spread downstairs, attendees headed up to the fourth floor lounge for a prompt 9am start, where 12 Hay Hill Director Stephanos Issaias welcomed everyone to the day.

The first session was titled Economics and Markets, chaired by Chris Giles, the Economics Editor of the FT. The emphasis of the debate was to be on how growth can be sustained in the face of political and technological disruption. As it turned out, politics — and the global economy — took pride of place in the discussion.

Chris Giles introduced the panel and announced that Davos was reported this year to be ‘flat’. (He did say later, though, that every year he found people being seriously glum in January, no matter the financial outlook.)

Although the numbers don’t point to any serious downturn, the general feeling remains downbeat and pessimistic. The US sees Iran, North Korea, and the state centred economy of China as the big problems they face. In terms of risk, although climate and inequality were raised as significant issues, no telling decisions were made to reduce their impact.

Chris then introduced the panel. During the debate, use of the sli.do app was encouraged to respond to surveys and to ask questions. The first survey revealed that Brexit — perhaps predictably — was the major issue currently affecting business confidence among attendees. This was followed by 66% responding that they believed a global slowdown was on its way.

The panel for this talk featured:

Martin said that, although many sympathise with current American trade aims, they disdain the approach they’re taking.

Gavyn said that the rate of slowing down is greater than the IMF data would indicate. More than that, it continues to slow. It’s debatable whether policies can reverse this trend. In the US, the outlook may depend on wage rises and whether a continuing overheating economy forces the Fed to become more hawkish.

Elina wants a change of approach in thinking. Things are now about geopolitics and national interest and how that feeds into the global economy. China is a real threat to US economic hegemony and security and it could be that the US turns its back on multilateral trade agreements. If it starts to feel that these are no longer to its advantage, it will start to set up bilateral deals.

Helene spoke of how France is bucking the trend with both fiscal expansion and the fact that the level of inequality has not increased in the past decade. She then spoke of how Italy was changing dramatically in the face of the downturn. Before, although the north and south were split in terms of wealth, the country remained unified through the influence of both the Communist Party and the church. Now, north and south are split by politics.

Martin said that China has a demand deficit but the macroeconomic levers available to raise growth will lead to economic imbalance. This worries them. China is not in any way insolvent but they have long term structural problems that are exacerbated by the short term fixes they put in place to counter things like the recent trade barriers imposed by the US.

Helene said that the flow of capital last year underscored how crucial the dollar remains as the global exchange currency. The Fed is embarking on a tightening cycle which will affect countries with a deficit. It’s clear to Helene that there is a correlation between the tightening of the dollar and a trade downturn.

A quick survey on the app resulted in an even split for the question of whether trade tensions will escalate or subside in 2019.

Wall of money is so large that investment decisions based now on what Blackrock are doing. Elina says that asset managers grew enormously as a result of regulation on banks. Martin thinks this is better than relying on the liquidity of banks

Discussing how central banks would react to the next downturn, Martin suggested that, although there are options over and above quantitive easing, those options have technical side effects and will be politically difficult. He also believes that the Fed will refuse to go negative on interest rates.

Gawyn, on the other hand, believes that what is likely to be a demand recession means that central banks will struggle to use their normal tools. He thinks a fiscal stimulus will be a likely result, although this is often deemed to be an inflationary move.

Helene thought that a way to implement negative interest rates — especially below 1% — would be to get rid of high denomination notes to prevent people from hoarding cash.

The discussion then turned to Brexit.

Martin was astounded by how extraordinarily little planning had been done for leaving, with or without a deal. He believes that there is a need for a long extension past the end of March in order to debate the deals necessary around a no deal exit.

Helene said that Brexit is simply not high on the news agenda in France. She believes that the UK seems to overestimate its power in the negotiations.

Elina believes that the EU is unlikely to offer extensions because that would be seen as weakening their negotiating position. Some extension might be possible if there was a focus on a single issue.

Gavyn responded to Elina by suggesting that the amount the EU would lose from their budget on Brexit was not insignificant. That made the UK’s bargaining position stronger than many think.

Chris brought the debate to an end and reminded everyone that the next session started at noon.

Taking the Emphasis Off ‘Healthy Eating’