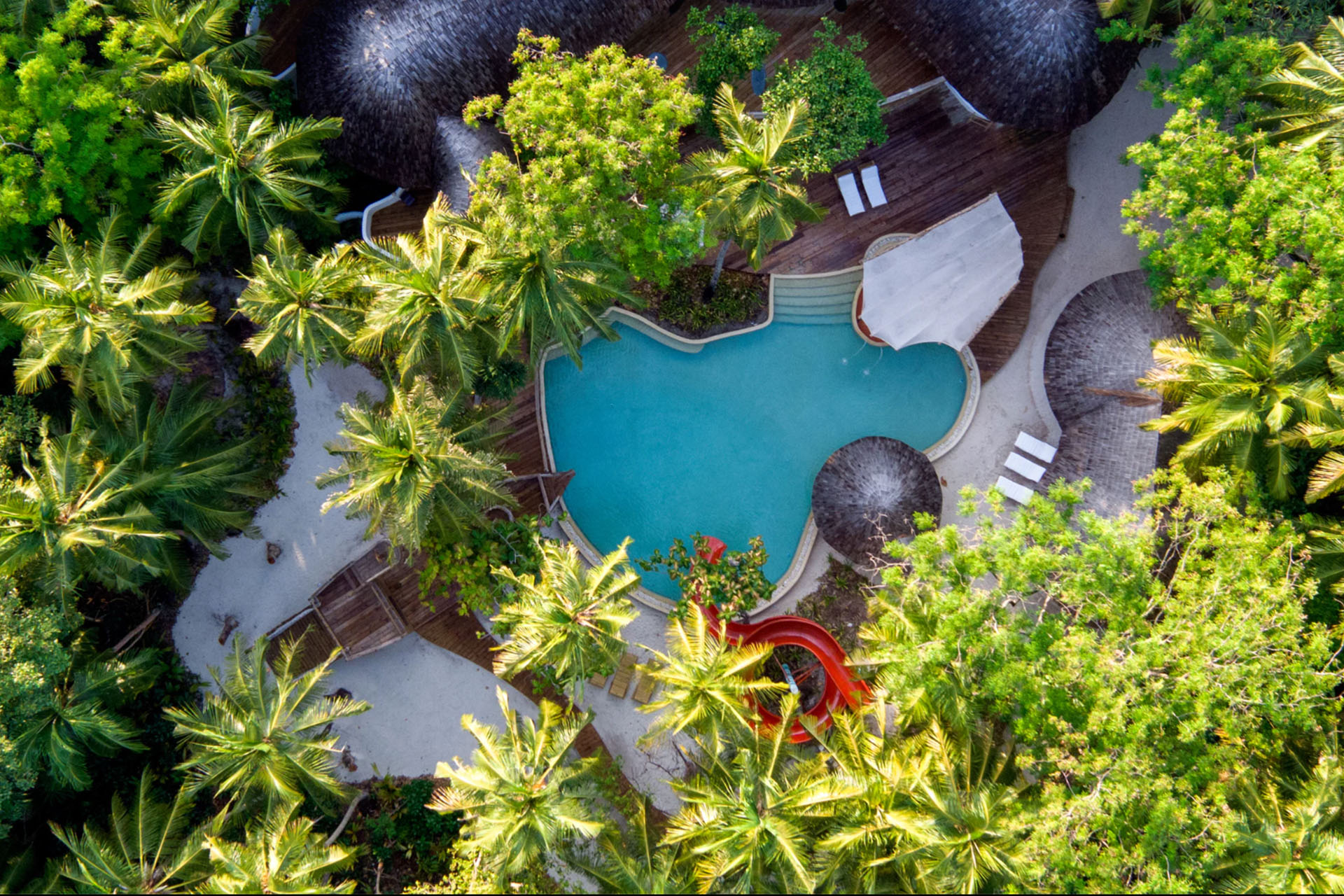 I remember when my days would start on a concrete platform awaiting a busy train into work. I was just another body, attempting to squeeze into any gap I could before the train doors shut on me. I still find it hard to believe that there are probably more people on one busy London commuter train than the total number of people who share my island home.

Today I live an existence I could have never even fathomed just a few years ago. I am the residential photographer and filmmaker at a luxury island resort in the Maldives called Soneva. Every single day is different and I am incredibly lucky not to have ever suffered any form of monotony fatigue in the 2 years that I’ve been here.

Having previously lived in cities like London, Edinburgh and Bangkok, the view from my bedroom window has changed dramatically. The tall, grey concrete buildings have been replaced with palm trees. In the place of the roaring sounds of traffic, I am subjected to the occasional coconut falling onto my roof, breaking the rhythm of jungle noises. Instead of a people watching I am entertained by water hens or multi-coloured oriental garden lizards doing what looks like press-ups against the trees.

My day starts by hopping on my bicycle barefoot and reaching the office within 3 minutes. As I cycle under the luscious, green canopy, exclamations of “good morning” are shared with any and everyone that cycles by – whether that be a guest or a host. It’s become hard not to bring that habit back to London whenever I visit, for fear of being thought of as a little crazy!

Now here’s where it’s hard to describe a “typical” day. Some days I’m shooting for hours on end, some times it’s predominantly a post-production wormhole, sometimes it’s a mix of both with interspersed meetings with the operations team – all the while, the subject matter in each of these circumstances are constantly changing!

We are incredibly lucky to be able to welcome Michelin starred chefs from around the world to prepare special dinners for our guests. My team and I are even luckier to have to capture each and every one that arrives, as well as their dishes.

Should a chef be in house, I’ll spend a couple of hours with them in the kitchen, finding creative ways to photograph their dishes. We even shot one in the ocean as the chef’s wife stayed underwater to hold it up! Then, I’ll put on my filmmaker’s hat and the chef and I will work together to create a recipe video. At this stage, we have a bank of over 30 recipe videos, which we’ll put together in post-production. The best part though? Getting to taste the dishes after. My taste buds have now officially been spoilt!

Some of our guests want the ability to forget about spending their time capturing their holiday, but they still want the photos or videos. I mean, who wouldn’t? So on the days when I have guest bookings, I’ll spend time with them to learn what they want and what they’re like as a couple or a family.

My favourite example is a family I’ve captured twice – on their second visit they even returned with a new family member! This beautiful young family invited me on their private island picnic excursion. I can’t think of a better place to do a photo shoot. Picture this: a tiny, uninhabited island surrounded by the crystal waters of a turquoise lagoon, blending ever so subtly into an endless deep blue as the reef drops off, just beyond the nearly blinding white sand. Nothing but a wooden shack, some sun umbrellas – and us.

Then there are events. The biggest one I can think of being New Year’s Eve – this is where we really go all out. The whole island turns into a spectacular food and entertainment journey. Beginning at the sandbank a speedboat ride away, guests then trickle back and meander underneath decorations and flickering lanterns that dangle from the trees, and are treated to dish after incredible dish, games, dancers, musicians, contortionists; the island becomes another world. It’s my job to capture every element of the magic, in the best way that I can.

My journey begins, both photographing and filming the night is a big job – I’ll shoot the drone across to the sandbank, bring it back to the island and fly it across the island before it gets dark, then get the photos and videos out for the next day. No pressure!

I’m not always on the island either; some days take me away for community engagement projects. We take our work with the local community seriously and we have an amazing team that have set so much in motion. Right now, we’re in the middle of a campaign referred to as “Plastic Free Maldives”, that sees us working with three local islands to help them eventually become plastic free.

Whether that be by installing a water bottling plant to eradicate the need to import plastic bottled water or by doing an island-wide cleanup day, I get to join these community endeavors and often get my hands dirty with them as well.

Because the resort never stops, it means we don’t either. There’s always something to capture and the three examples above don’t even begin to cover it. I can’t help by highlighting turtle hatchlings, seeing glass blowing live in the glass studio for the first time, football camps, tennis camps, celebrity film screenings, architectural photography shooting villas, starry nights and astrophotography, underwater shoots such as freediving, surfing, Soneva in Aqua (our private yacht) excursions, short film projects, music videos, dolphin cruises and so much more.

However, it’s important to take time to wind down. What’s the point of living on an island if you can’t enjoy the ocean? So when there’s a chance you’ll see me freediving with the fishes or just enjoying the ocean breeze with a good book. Or sometimes I’m cracking open some coconuts to grind down the flesh to make healthy bliss ball snacks. Or I’m practicing yoga, working out, journaling, or occasionally taking full advantage of our access to the spa. I have to say, I’m incredibly lucky. It’s not a bad life!

Click here to find out more about life on Sovena.